b. Overall Demand and Litigation Rate 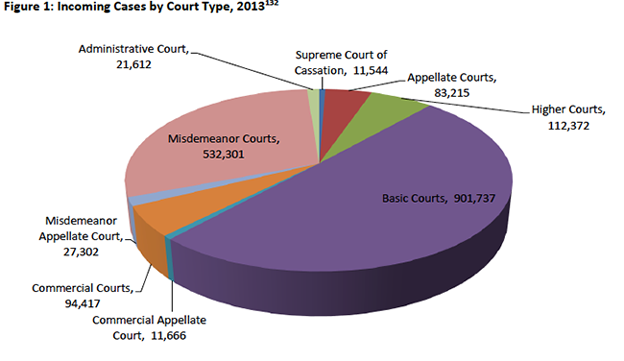 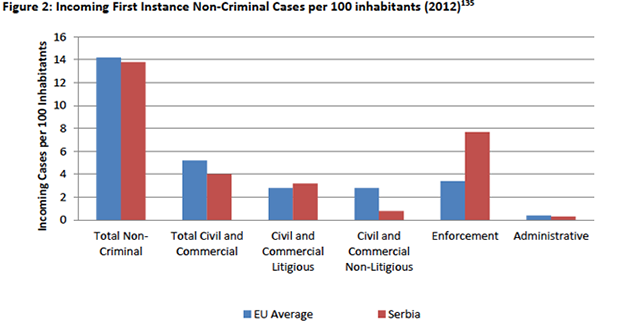 Box 1: What a ‘Case’ is and How the Definition Affects Litigation Rates

Serbia counts as an incoming case several items that most likely should not remain in this category. For example, many systems’ enforcement is not considered as a separate ‘case’. There is also a separate (i.e. double) accounting for criminal investigations and criminal trials. Similarly, a trial, its appeal, and its retrial are each counted as separate cases. (This has a large impact on caseloads, because a retrial is the most common result of a successful appeal in Serbia.) As a result, the number of ‘cases’ in the system is highly inflated.

Judicial workload is a different concept from the number of cases. Judicial workload includes a range of additional acts that represent real work for judges and the staff who support them. For example, appeals should arguably not be new caseload even though they represent work for judges. It also does not include cases that involve little judicial work, such as enforcement cases. Understanding judicial caseload also shows what happens to cases once they enter the system – whether, for example, most cases are decided in the first instance136 or instead go to endless, sometimes circular, appeals and are recycled as ‘new old demand’.

Given challenges with the existing court statistics, the Review will be as specific as possible in what is measured given the current existing data. In many examples, it is not possible to distinguish truly new (first instance) incoming caseloads from the rest. Comparative data from the CEPEJ are similarly limited. As improvements to Serbia’s automated registries are made, it will be important to consider how these dimensions of judicial work can be measured and counted separately.

An important reason why demand for court services is falling is that several of their services have transitioned to other providers. These changes have had, and will have, an impact on incoming cases to various degrees. Their effects will not, however, eliminate court backlog created under prior laws. This backlog will remain until the courts find other means to dispose of those cases.

Land registries: From 2009, the role of land registries was transitioned from the courts to a Cadaster. Before then, court staff at the II Municipal Court in Belgrade were said to deal with around 300,000 cases per year. Any disputes over land remain with the courts as before.

Private Enforcement Agents: In 2012, enforcement agents (now called ‘enforcement agents’ were introduced to divest from court bailiffs the enforcement of certain types of disputes relating to monetary enforcement, and mainly focusing on the enforcement of unpaid utility bills. This transition led to a sharp fall in new incoming cases in the Basic Courts in 2013. The change may also affect caseloads in the Commercial and Misdemeanor Courts, but is not identifiable in the statistics provided.

Criminal investigation: In 2013, the function of criminal investigation was transferred from investigating judges to the prosecution service under the 2013 CPC. As a result, approximately 38,871 cases were transferred from the courts to the prosecution offices, comprising around 658 cases from the Higher Courts to the Higher PPOs, and the remaining 38,213 cases from the Basic Courts to the Basic PPOs. As shown in Figure 4 and Figure 5, criminal investigation represents a minor portion of Basic and Higher Court caseload. This transfer will therefore have less effect on litigation rates and demand, and courts will maintain a role in overseeing the process and may still count their interventions as cases. (It is, however, having significant impacts on prosecution workloads, discussed below.)

Geographic coverage of the court network: The geographic coverage of the network has also decreased. As of January 1st, 2014, Kosovska Mitrovica is no longer part of the new court network in Serbia. Under the Brussels Agreement signed in April 2013, it has been agreed that the judicial authorities in Serb-dominated north Kosovo will be integrated into, and operate within, the Pristina-run legal framework; and the appellate court in Pristina will establish a panel composed of a majority of Kosovo Serb judges to deal with all municipalities where Serbs form the majority. The Review team is not aware of any HJC and MOJPA plans of transferring cases or staff (judges, prosecutors and administrative staff) from Kosovska Mitrovica into the Serbian court network.

Private notaries: The introduction of private notaries will significantly reduce the number of non-litigious civil cases that come before the courts. However, no analysis has been undertaken of the likely impacts of these reforms on existing caseloads. In 2013, the Basic Courts resolved more than 700,000 verification cases, including the verification of non-public documents, signatures, handwriting and copies of documents, and documents intended for use abroad. Beyond that, statistics on non-litigious caseloads in the case management system (AVP) do not disaggregate the categories of cases that will become eligible for private notary services, so the Review team was unable to identify more precisely the likely impacts. Private notary services are, however, predicted to significantly reduce the workloads of registry staff but are unlikely to impact judicial workloads. For discussion on the corresponding need for staff reduction programs in courts, see the Human Resources Chapter. For discussion of the financial impacts of stripping courts of verification services, see the Financial Management Chapter.

Mediation: Should mediation re-emerge in Serbia, it too may reduce workloads. Under the new Mediation Law, mediation could be applied in a range of cases including property lawsuits, family, commercial, administrative, consumer, environment and labor cases, and in the determination of damages in criminal and misdemeanor cases. The Law offers some incentives to court users to mediate. Court costs would be waived in cases that have been initiated but are successfully mediated before the first trial hearing. Further, mediator tariffs would be defined by the MOJ rather than the Center for Mediation which previously set high tariffs that deterred users. Whether such incentives are sufficient to overcome previously failed reforms and promote mediation of disputes is another matter. For a further discussion of mediation, see the Access to Justice Chapter.

Limits on successive appeals: A final change, with some impact on apparent litigation rates although not on mandate, is the limitation on second appeals. This provision was introduced in 2010 as an amendment to the existing Codes, and remained in the Civil Procedures Code enacted in 2012. From 2010 onward, while an initial appeal may remand a case for retrial, a second appeal will conclude with a judgment by the appellate court.