Small Claims in Serbia – Recommendations for Streamlining the Procedure 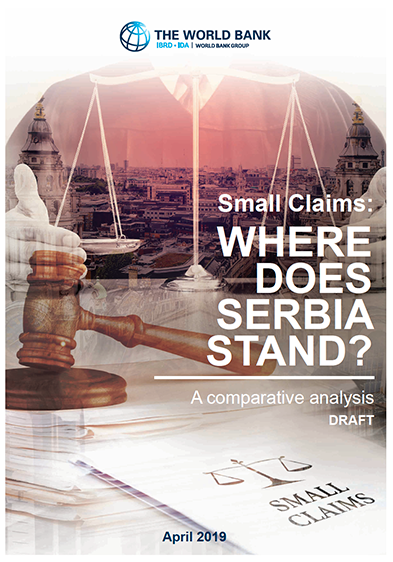 Serbia Judicial Functional Review of 2014 recommends streamlining the procedure for small claims with a view to its acceleration as one of the measures for improvement of overall country’s judicial system performance. To support Serbian authorities in designing reforms the MDTF JSS prepared Report Small Claims – Where Does Serbia Stand?  to provide recommendations for the optimization of the procedure for resolving small claims in Serbia based on the comparative analysis with other jurisdictions.

Findings in the Report are based on the interviews and desk research since it is impossible to quantify the scale, the average duration or the appeal rates for such cases because the case management system does not regard them as a category separate from general civil or commercial litigation.

The Report examines how the procedure for resolving small civil and commercial claims is regulated in the law and implemented in the court practice of six European Union jurisdictions (Austria, Denmark, Estonia, Germany, Latvia and Slovenia). It then compares that to the small claims procedure in Serbia. The aim of the Report is to outline and examine critically the types of simplifications used in comparator jurisdictions and discuss which ones bring about the greatest gains in terms of reducing the length and cost of the procedures and could be appropriate for the Serbian context.

The choice of comparator EU jurisdictions is based on several criteria. To ensure relevance, the selected countries are part of the continental law tradition, do not have fundamentally different legal systems as compared to Serbia and have not established small claims courts as separate judicial institutions. To ensure variety of approaches, three of the chosen jurisdictions are from the so-called “old democracies” of Western Europe and the remaining three represent East European nations which have been part of the Eastern bloc. Finally, to ensure quality of comparators, the team chose countries whose justice systems perform at a relatively high level based on the standards of the Council of Europe European Commission for the Efficiency of Justice (CEPEJ).

The report follows the development of a typical small claims procedure exploring its elements such as threshold below which the procedure is applicable; fees; filing the claim; collection of evidence including the level of initiative admissible for judges in adversarial systems; preparation of the case; hearings; timelines; judgement; grounds for appeal; fees for appeal; rules for the appellate court; and the potential of alternative dispute resolution in small claims. Finally, the report presents its conclusions and recommendations.

There are four areas in which Serbia’s rules deviate significantly from comparative examples:

1. Scope of the procedure:

The level of the threshold in Serbia is unusually high, especially for commercial claims. Therefore, the scope of the small claims procedure is extremely broad. At the same time, judges lack of discretion on whether to apply the simplified procedure or not regardless of the complexity of the case. There are two main consequences: (1) judges may have to decide a complex case with a relatively high value under the simplified rules thus not giving it sufficient attention; and (2) further simplifications to the procedure can be very hard to accept, given the broad category of cases that would be affected.

Recommendation:
Reduce the commercial cases threshold or, alternatively, keep the current threshold while introducing an additional, lower threshold to which more significant simplifications could be applicable. It is also advisable to give judges discretion to choose which simplifications to apply to each particular case.

2. Preparatory phase of the case:

Finding:
Drastically shortening the preparatory phase of the case, as Serbia has done, may necessitate a larger number of court hearings in order to clarify issues and collect evidence that could have been clarified and collected more quickly and cheaply within a well-structured preparatory phase conducted in writing.

Introduce a well-structured preparatory written phase in small value cases with short timelines and an obligation that parties should present/request all evidence that is available to them during that phase. Such written phase could be used to determine whether a hearing shall be conducted at all or the case could be resolved in a written-only procedure.

Unlike other comparator jurisdictions, Serbia does not provide for rules that would limit court hearings in small value cases.

Provide that small claims shall, as a rule, develop only in writing unless one of the parties has specifically requested a hearing.

If fees are very high, this can hinder access to justice. In Serbia, fees for small commercial claims with a high value are the highest among comparator jurisdictions.

Introduce a single fee per court instance payable at the outset of the procedure.